In preparation for a 1949 lecture at the University of California, Los Angeles on “Advice for Students,” Charles made the following notes on inspiration, methodology, and career strategy. They are excerpted here from An Eames Anthology:

Make a list of books
Develop a curiosity
Look at things as though for the first time
Think of things in relation to each other
Always think of the next larger thing
Avoid the “pat” answer—the formula
Avoid the preconceived idea
Study well objects made past recent and ancient but never without the technological and social conditions responsible
Prepare yourself to search out the true need—physical, psychological
Prepare yourself to intelligently fill that need

The art is not something you apply to your work
The art is the way you do your work, a result of your attitude toward it

Design is a full time job
It is the way you look at politics, funny papers, listen to music, raise children
Art is not a thing in a vacuum—
No personal signature
Economy of material
Avoid the contrived

There are things you can do to prepare yourself—to be desirable
orderly work habits
ability to bring any job to a conclusion
drawing feasibility lettering
a presentation that “reads” well
willingness to do outside work and study on a problem . . .

Primitive spear is not the work of an individual nor is a good tool or utensil.
To be a good designer you must be a good engineer in every sense: curious, inquisitive.
I am interested in course because I have great faith in the engineer, but to those who are serious
(avoid putting on art hat) Boulder Dam all’s great not due engineer

Photography and the Archive Research Centre

From Wikipedia, the free encyclopedia

Photography and the Archive Research Centre (PARC) is an organisation in London that commissions new research into photography and culture, curates and produces exhibitions and publications, organises seminars, study days, symposia[1] and conferences, and supervises PhD students. It is a part of University of the Arts London (UAL), is based at UAL’s London College of Communication at Elephant & Castle[2] and was designated by UAL in 2003.

According to PARC’s website its activities span the history and culture of photography, particularly post-war British photography, the documentation of war and conflict, the photography of fashion and style, the visualization of the counterculture and photographers as filmmakers.

Many of PARC’s activites are conducted in conjunction with other arts organisations and universitities including University of Sunderland, National Media Museum in Bradford, Library of Birmingham, Canterbury Christ Church University, Street Level Photoworks in Glasgow, Wolverhampton Art Gallery, Ffotogallery in Cardiff, Imperial War Museum in London, Photoworks in Brighton, University of Western Ontario in Canada, Expressions of Humankind and Max Ström publishers in Stockholm, Sune Jonsson Archive in Umea, Tate Modern and University of Wales, Newport.

Two of PARC’s divisions are War and Conflict Research Hub and Photography and the Contemporary Imaginary Research Hub.

PARC leads the Directory of Photographic Collections in the UK, a portal to UK institutions holding publicly accessible photographic collections.

Collections held within the Photography and the Archive Research Centre[edit]

On an Ungrounded Earth, by Ben Woodard

In a 2011 interview conducted by Bookfriendzy, when asked about why he started his multi-disciplinary journal Collapse, Robin Mackay said (and I’m doing my best to transcribe here), “There were a number of problems that it was designed to address, one of which is the problem of where philosophy can exist outside of the academic environment—because of certain constraints of the academic environment—and the way in which the discipline of philosophy is conducted and constrained, and the conviction that philosophy happens everywhere, not just in philosophy departments.”

It might sound obvious—and a little silly—to think about it that way but the idea of philosophy being created and consumed outside of academia is a relatively recent innovation. Collapse is merely one of several increasingly visible venues publishing philosophical thought outside “philosophy departments,” many of which have hefty presences on the web. Certainly towering figures such as Nick Land, whose writings span a huge variety of subjects, and Quentin Meillassoux, whose landmark 2006 text, After Finitude, helped usher in a new era of “modern” philosophy, have had a major influence over a new generation of thinkers, writers and artists looking to construct arguments without, as Mackay put it, constraints.

As philosophy has moved away from outmoded schools and systems of thought, it’s now acceptable—if not outwardly fashionable—for writers to include examples of both “high” and “low” culture to illustrate and support their points. This leads us to Ben Woodard’s absolutely astounding On an Unground Earth, in which Woodard samples from a dizzying array of literature and media, all primarily centered around the disciplines of philosophy, science-fiction and horror. (Here’s a brief list of references: Deleuze and Guattari, Ray Brassier, Iain Hamilton Grant, Reza Negarestani, Jules Verne, Edgar Allan Poe, H.P. Lovecraft, Thomas Ligotti, Dune, Tremors, Star Trek, Star Wars, The Matrix series, The Technodrome from Teenage Mutant Ninja Turtles, Gears of War, Doom 3 and Dead Space—among many, many others.)

The subtitle of On an Ungrounded Earth is “Toward a New Geophilosophy.” As the back cover copy states, “In far too much continental philosophy, the Earth is a cold, dead place enlivened only by human thought—either as a thing to be exploited, or as an object of nostalgia.” One of Woodard’s contemporaries, Eugene Thacker, has written that there are three ways of interpreting the world as we know it: 1) the world-for-us, or the world in which we live; 2) the world-in-itself, or the inaccessible world which we then turn into the world-for us; and 3) the world-without-us, or the spectral and speculative world. In these terms then, Woodard’s Ungrounded Earth seeks to explore the relationship between human consciousness and the world-without-us.

Arranged in five sections—and despite its relatively brief page count—the text of On an Ungrounded Earth covers quite a bit of…well, ground. Abyssal and external “ungroundings,” giant worms, the panic of burial, the “dimensions” of hell, volcanic orifices—these are only a few of the topics explored. Because this is philosophy, and so much of the text builds off of ideas and concepts introduced in earlier passages, it’s difficult to pull any excerpts without disrupting Woodard’s meticulous terminology and contextualized language. Suffice it to say, that language is approachable and articulate. I wouldn’t exactly go so far as to call it accessible, but it’s certainly very readable. Overall, an excellent balance is struck between introducing new ideas, analyzing those ideas and explaining how everything relates back to the core idea of the book.

Part of that core is a deeply rooted fascination with the idea of philosophy itself, of “philosophically experiencing” the earth as we have come to understand it. On an Ungrounded Earth is one of an increasing number of texts that might be best described as speculative realism. Characterized by strong undercurrents of “anti-correlationism,” or, an outright rejection to Kant’s idea that we are limited to the correlation between thinking and being, speculative-realist texts are enjoying a good amount of attention in times of ecological imbalance and chaotic world trends. In 2013, a lot of us have spent the majority of our lives with the Internet. We have a constant supply of too much information—the anxiety of a shrinking world. We’ve long-ago accepted the idea of the universe expanding, seen a hundred movies depicting the destruction of our planet and helplessly witnessed the major religions of the world clash with one another again and again. Perhaps this is it. Perhaps whatever meaning there is to be found isn’t contained in the world-for-us. Perhaps, Woodard urges, the meaning we seek is right under our very feet—and has been for quite some time.

David Peak’s most recent book, Glowing in the Dark, was released by Aqueous Books in October, 2012. He is co-founder of Blue Square Press, an imprint of Mud Luscious Press, and lives in New York City. 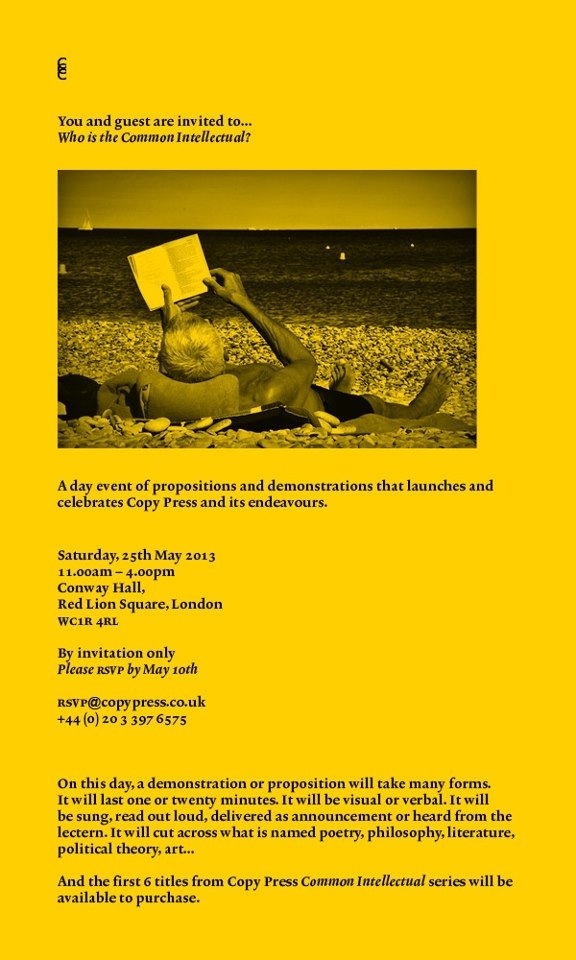 Copy Press is an independent publishing company based in London, dedicated to extending ideas of writing, pictures and readability. Currently publishing 100-page paperbacks under the series name Common Intellectual, each title provides a proposition for living, thinking and enjoyment. Copy Press publishes authors whose work endeavours to bring writers and readers into a space where common voices can come together and gather mass.