The Universal Addressability of Dumb Things 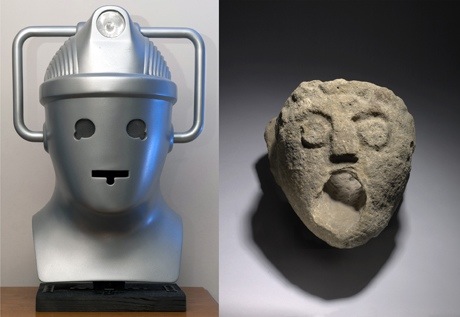 Turner Prize-winning artist Mark Leckey has curated an exhibition that explores the magical world of new technology, as well as tracing its connections to the beliefs of our distant past.

Historical and contemporary works of art, videos, machines, archaeological artefacts and iconic objects, like the giant inflatable cartoon figure of Felix the Cat – the first image ever transmitted on TV – inhabit an “enchanted landscape” created in the Pavilion’s galleries, where objects seem to be communicating with each other and with us.

In Leckey’s exhibition “magic is literally in the air.” It reflects on a world where technology can bring inanimate “things” to life. Where websites predict what we want, we can ask our mobile phones for directions and smart fridges suggest recipes, count calories and even switch on the oven. By digitising objects, it can also make them “disappear” from the material world, re-emerging in any place or era.

In this timeless exhibition, “the real and the virtual co-exist”, Leckey has said. Perhaps technology has created its own form of consciousness – an animistic future. While we already live in the realms of what used to be science fiction, we seem to have simultaneously gone back to our ancestral past – a time when ancient civilisations believed spirits inhabited plants, animals, geographic features and even objects.

Leckey’s theatre of “things” is presented in specially designed environments. Works by artists such as William Blake, Louise Bourgeois, Martin Creed, Richard Hamilton, Nicola Hicks, Jim Shaw and Tøyen are displayed alongside a medieval silver hand containing the bones of a saint, an electronic prosthetic hand that connects with Bluetooth, a bisected 3D model of Snoopy showing his internal organs, and many other treasures that all share connections. Loosely divided into four themes or scenes – the Vegetable World, Animal Kingdom, Mankind and the Technological Domain, Leckey’s exhibition is a collection of not-so-dumb things that all talk, literally or metaphorically, to each other.

Mark Leckey was born in Birkenhead in 1964. He currently teaches at Goldsmiths College, University of London. In 2008 he won the Turner Prize. Recent solo exhibitions include Work & Leisure at Manchester Art Gallery (2012), and See We Assemble at the Serpentine Gallery, London (2011). The Universal Addressability of Dumb Things is the latest in a series of artist-curated Hayward Touring exhibitions.

‘The status of objects’, Leckey argues, ‘is changing, and we are once again in thrall to an enchanted world full of transformations and correspondences, a wonderful instability between things animate and inanimate, animal and human, mental and material’. Our hyper-rationalism of modern technology has paradoxically produced its opposite, an ‘irrational’ magical realm – or as Marshall McLuhan, communication theorist, described “a resonating world akin to the old tribal echo chamber where magic will live again”.