A Grandson’s Account of his Grandfather’s Life and his Collection of Photographs.

… an essential constancy of modern art – uniqueness of personality – persists; no longer manifested through facture, the individuality of touch, but through an unrepentant autobiographical confession or fantasy concerning those areas of human activity in which the artists are most singularly personal their literally – private lives. [Pincus-Witten 1977]

[1] Twenty-five years ago, paleontologist Stephen Jay Gould and biologist Richard Lewontin criticized the so-called adaptationist programme, charging that overeager biologists labeled some organisms’ traits adaptations without real evidence. Many traits, they said, were actually by products, associated with adaptations, but not the result of natural selection. The bridge of one’s nose will hold up one’s glasses, but it’s not an adaptation for such. This so-called science, argued Gould and Lewontin, boiled down to little more than just-so stories–referring to Rudyard Kipling’s century-old children’s fables that offered imaginative explanations for certain animals’ distinctive qualities. URL: http://www.the-scientist.com/yr2004/mar/research2_040301.html

SLR Camera made into a slide projector  2003

The aim of this thesis is to explore contemporary attitudes to photography and the degree to which photography has had an affect on autobiographical memory[2]. The key vehicle for this exploration is my own studio practice which appropriates photographs originally taken by my grandfather, A.E. Ingham, some of which coincide with my own childhood and hence throw an illumine but disconcerting light on my own autobiographical memory. I propose to discuss ways in which autobiographical memory is formed, stored and retrieved, and to move on to consider how these processes have evolved through interaction with photography. The opening chapter initiates this investigation with an analysis of the subject matter of my grandfather’s collection of photography. The collection is a means by which I am able to examine the relationship between my own sense of autobiography and photographs of past events which form a part of that autobiography.[3]

[2] Autobiographical memory is a term use by researchers into memory to define a type of memory for events and issues related to a persons life. As will be shown in Chapter 2 of this thesis it has different characteristics to other types of memory. Martin A. Conway working in the Department of Psychology at Durham University explains that there is a type of memory called Autobiographical  Memory and this is, ‘…a type of memory that persists over weeks, months, years, decades and lifetimes, and it retains knowledge [of the self] at different levels of abstraction, [Autobiographical memory] is a transitory mental representation: it is a temporary but stable pattern of activation across the indices of the autobiographical knowledge base that encompasses knowledge of different levels of abstraction, including event-specific sensory perceptual details, very often – although by no means always – in the form of mental images.’ [Badderley:55] 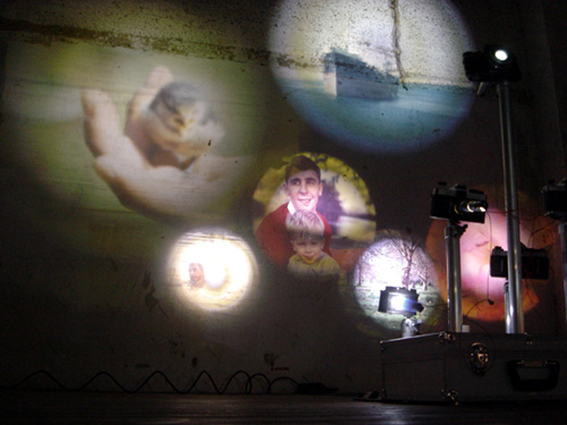 “120 Days and Nights of Staggering and Stammering”  SLR Camera Projectors and Slides. 2008

[3] Martha Langford writes: ‘As long as photography has existed, claims for its usefulness as a repository of memory have been countered by arguments that echo the ancient distrust of writing, the fear that reliance on any system of recording ultimately leads to mental degeneration, to a condition of mnemonic atrophy’ [Landgord 2001:4].

Initially, I am concerned with why, as an artist, I have been using the collection as a basis for my work and theoretical concerns. I begin, therefore, with an autobiographical approach, an account of my own childhood memories and how they connect to the photographs in the collection. Of necessity, this account is both a partial and fragmentary, and is in part informed by photographs themselves, as for example when these have triggered a further associative chain and/or network of memories. This narrative is thus written in a conventional autobiographical form, combining the ‘facts’ of my life with my own reminiscences of actual events.

There follows a biographical account of my grandfather’s life, using the written and anecdotal evidence I have been able to gather about his life, alongside my own personal recollections. It is included to make possible some understanding of his motivations for taking photographs and as a way of understanding my own interests in the collection. This biography is pertinent for the concerns of my thesis as it constructs and interprets a version of the past; as in their own way do autobiographical memory and photographs.

In the conclusion of this chapter I will begin to examine these two modes of description as ways of analysing and interpreting past events, and to consider how these subjective processes of recounting, themselves, can influence memories.[4]

[4] Psychologist M.A. Conway says of this, ‘When a person has the experience of remembering a past event then knowledge drawn from the phenomenological record, thematic knowledge, and the self all contribute to the construction of a dynamic representation which constitutes that memory.’ [Roberts:137]